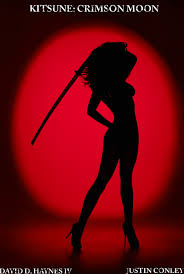 Kitsune: Crimson Moon is the first novella in a series that follows Detective David Hamada as he investigates the murders of young women in Tokyo's Shinjuku ward. In the course of his investigation, Hamada runs afoul of a number of criminals who run the local strip club. Meanwhile, a sort of shape-shifting avenging angel is busy killing those same criminals, which makes Hamada's job at once both easier and harder.

On its surface, this book should have a great deal to recommend it, including mystery, supernatural elements, and plenty of sex. Unfortunately, it falls down in the execution right from the first page.

Full disclosure: This reviewer is a teacher who frequently reminds her students about the importance of carefully editing assignments before they're turned in. My students sometimes complain that since I don't teach English, I shouldn't deduct points for grammar, spelling, sentence structure, and punctuation mistakes. My reply is that they can have the greatest ideas in the world, but if their readers are distracted by mistakes in the writing, no one will take those ideas seriously. That's true whether you're talking about an English paper or a chemistry lab report – or a crime novella set in Japan.

Parts of Crimson Moon are evocative and engaging, but many more parts are jarring and hard to read because of grammatical errors and overall sloppy editing. This isn't true on just a few pages, either. It persists throughout the entire book. For instance, the second paragraph contains this sentence:
The killer deemed the Monster had a proclivity to go after young schoolgirls and commit the acts so sick that mind could not conceive.
By page 41, things hadn't improved. The third paragraph reads:
"You think I'm afraid of dying," Ichiro exploded in laughter?

The errors were distracting and prevented the reader from being able to fully focus on the story. Which brings up concerns with the story itself. It's full of graphic sex and sadistic murders, which aren't everyone's cup of tea. Maybe it should come with a warning label. It's also unclear why this book was sent to a New Adult book review site. Most New Adult books feature main characters between the ages of about 18 to 25 dealing with problems that people that age often address. Things like getting through college, finding that first job, or having to buy an ugly bridesmaid's dress are common themes. In this book, the only people from 18 to 25 appear to be the dead girls, and their problem is that they've been killed by sadistic members of the Japanese mob. Fortunately that's an uncommon experience for most New Adults.

Reviewed by Amanda
Posted by Unknown at 9:51 PM