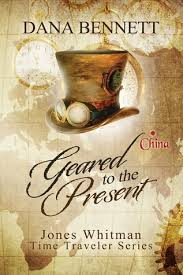 
Geared to the Present follows the exploits of Jones Whitman, a young inventor who completes work on his first time machine in 1891. Jones used to be a mischievous young man, which resulted in his father sentencing him to study in China with a Hung Gar Kung Fu master. The training worked wonders for Jones, who returned home to Boston prepared to be an upstanding citizen.

Best intentions and new-found self discipline don't keep Jones from running afoul of the local priest. Father Carlini dislikes Jones for his transcendentalist beliefs and his engagement to one of the priest's pretty young parishioners. Jones' fiancée doesn't have much interest in inventions, but instead seems primarily focused on getting Jones to give her some of his time and attention.

Jones is optimistic about a test of his time machine, until something goes wrong and he accidentally lands 120 years in the future and thousands of miles away. It's in modern-day Washington State that the adventure really begins.

This is an entertaining book, and Jones is a likeable main character. He's funny, jovial and a generally honorable guy. His old fashioned manner of speaking gives his modern friends pause, but for some reason they seem satisfied with his explanation that he comes from Boston.

There are some problems here though. For one, there is surprisingly little conflict while Jones is in Washington. His problems had largely been left behind in 1891, and he isn't even aware of trouble brewing back there with the meddlesome priest. Considering the fish-out-of-water nature of the story, one would expect some unfriendly locals or other issues to put a monkey wrench in his visit to the future. Those never materialize, however.

Another troubling issue was the time travel itself. Jones created a contraption that not only moved through time with absolute precision but also moved through space. He started in Boston and landed in Washington. That aspect of his invention deserved more attention than it got.

Overall, this is a good steampunk time travel tale with an intriguing main character at its heart. Young Jones Whitman will doubtless travel again.

Reviewed by Amanda
Posted by Unknown at 9:08 PM

Email ThisBlogThis!Share to TwitterShare to FacebookShare to Pinterest
Labels: 3.5 out of 5, book review, Dana Bennett