This Piece of My Heart by Robyn M. Ryan book tour

This Piece of My Heart by Robyn M. Ryan 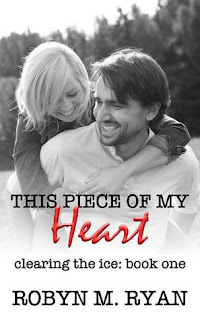 For twenty years, Caryn Stevens dutifully followed the educational path dictated by her parents. That path had one goal—prepare her to one day assume her father’s position as CEO of the multi-billion dollar international company he founded. That and marry a man who would enhance her career and perhaps join her in leading The Stevens Company. Not too much to expect from your daughter, right?
Caryn has other ideas. Instead of returning home to Ottawa for another summer working at The Company, she’s designed a plan to stay in Toronto, take a couple of courses, and enjoy herSummer of Fun. She knew there was more to college than rigorous classes that held little interest and study groups to ensure she excelled in all her subjects. She had two years until she finished her undergrad, and then continue on to that coveted MBA at a prestigious business school.
Just this once, Caryn will set aside The Plan and enjoy life as a regular student.  To actually get her head out of the books and maybe, just maybe find someone to make the summer—dare she say it?—exciting.
You see, there’s this hunk of a guy she’s noticed on campus the first few weeks of summer. Always running—maybe in training?—but, Caryn’s seen enough to get her heart pounding. Tall, well-built, with shaggy light-brown hair. Gym shorts that emphasize taut leg muscles. Sometimes wearing a t-shirt with cut-off sleeves. Bronzed muscular biceps—truly drool-worthy. Absolutely hot—and gorgeous in a totally guy type of way. Only problem, he had no clue she existed.

Andrew Chadwick has enjoyed life in the fast lane in the five years since he’d entered the ranks of professional hockey. Preparing for his fourth season with his hometown Leafs, Andrew intends to enjoy his summer down time—hang out with friends and family, keep in shape, and erase all memories from that disastrous two-year joke of a relationship that imploded in May.
Not that he has any plans to revisit his first few years in the pros. He’d eagerly sampled the attentions of a never-ending line of women who wanted nothing more than to spend one night with a professional athlete. Believe it or not, one-night-stands with absolutely gorgeous women whose names he never bothered to remember became tedious. And that steady relationship he tried for two years? Finding your so-called girlfriend in your own bed with some other guy certainly opened his eyes.
Maybe it’s time to cut the fun and games and concentrate on things that are important—Win the Stanley Cup, give his brother any support he needs as he starts his Internship Rotations, help his Mom and Dad around their house. Act like a grown-up at twenty-four?
He’s not particularly looking, but if he were to meet someone interesting…well, he’ll just see where things go.

Neither Caryn nor Andrew expected their two very different worlds to collide on a beautiful June day…
Goodreads: https://www.goodreads.com/book/show/29470235-this-piece-of-my-heart

From early childhood, Robyn M. Ryan knew she wanted to write. This goal grew throughout elementary and high school, first composing novels featuring favorite TV and music personalities, then venturing into sports writing. Attending UGA’s journalism school launched her career in public relations, which included an internship with the Atlanta Flames NHL hockey team. At that time romance novels did not feature pro athletes, so Robyn wrote the books she and her friends wanted to read. Many years later, this manuscript received a serious critique and edit. This Piece of My Heart, a hockey romance, is the first book in Robyn’s series Clearing the Ice.