Review: Say When: A Something More Novel by Tara West

Say When: A Something More Novel by Tara West 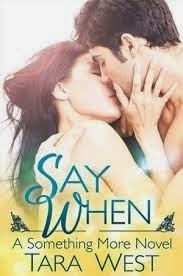 
Christina's 21st birthday isn't exactly living up to expectations. In fact, it pretty much sucks. Her fiancé Jackson is acting like a jerk – as usual – and she's had enough. She decides that she'd rather be subjected to her mother's wrath over walking away from Jackson's money than spend another minute putting up with him and smelling his bad breath. So she calls her friend Karri for an emergency pick-up, but Karri's never been known for either dependability or good judgment. A series of misadventures lands Christina at a gas station in a slum, wondering how she ever got herself into such a mess.

Enter Andres. He's the classic hero: handsome, kind, a fantastic lover, and he can even cook. He's also been emotionally wounded – in need of the right woman to save him.

A problem with the book is that it occasionally swerves from Christina's first-person perspective over to Andres' first-person narrative. These sections are short, and they largely focus on his thoughts about Christina. Oddly, this makes Andres seem much less three-dimensional than he does when the reader is looking at him through Christina's eyes. One assumes that there's more going on in the mind of each character than the author writes, but when you see inside a character's mind and there's very little substance, it's a disappointment.

The fun of Say When is in the telling, particularly its vivid descriptions. For instance, the fiancé with breath that "smelled like farts" and Christina's friend Karri's apartment "is like a Venus Flytrap for tattooed ex-cons and druggies, all looking for sex." In just a few words, the reader knows so much about Christina and Karri and their relationship. There are graphic scenes, so this book's not for kids, but most fans of New Adult books aren't going to be scared away by sex or bad language. It's also intense, with a number of really obnoxious people behaving badly, so if you're looking for a light, happy, summer beach read, this isn't it.
Say When isn't a new story, and we've seen variations on these characters before, but it's well told and entertaining. Readers will care about the characters and cheer when they get what they deserve.

Reviewed by Amanda
Posted by Unknown at 11:11 AM