The Captured Heart by Beverly Rae 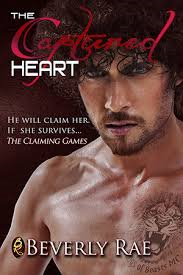 Link to buy The Captured Heart: He will claim her. If she survives... (The Claiming Games) (Volume 1)

He will claim her. If she survives... A chance to win money. A chance to find love. But only one can be claimed. Dear Ms. Pierce, This is your opportunity to fulfill all your dreams. Do you yearn to capture a man’s heart and have him capture yours? Do you dare to find a man who will treat you to your deepest desires, awaken your heart, and claim you for his own? Are you strong enough to find an extraordinary man? If so, read on… College student Erin Pierce and her two closest girlfriends seek adventure and love. After each receives an invitation to enter The Claiming Games, they travel to Fang’s Bar and Grill, ready to take on the challenge of a lifetime. When they arrive, they’re greeted by the amazing, sexy men of The Kings of Beasts MC. But these men have a dark side. They’re bad boys with fangs and claws. If Erin survives the games, she has a choice to make. Claim $250,000 in prize money or the man of her dreams. But Erin doesn’t believe in dreams coming true. She has a terrible secret, one she believes will send a man running, destroying any chance at love. When Erin meets Colter Quaid, she has no idea that his secret is just as shocking as her own. Can they forget their terrible pasts? Or will Erin survive the challenge only to lose her future? Enter The Claiming Games and find out. The Captured Heart includes a wild hike through the woods, men who love motorcycles and strong women, a hero with fangs and claws, and a girl coming of age while dealing with an unrelenting past. WARNING: This is a New Adult paranormal romance that contains explicit sexual content, graphic language, violence, and other situations that some readers may find objectionable. Not intended for those under the age of 18.

This was a very interesting read that I couldn’t put it down and  practically read it in one sitting. Colter was a hero you wanted to swoon over and Erin was a flawed and broken heroine that needed saving. Erin is a very relatable female character. Colter is very mysterious which I both like and dislike. But were very swoon worthy.

However, there are times you want to shake the hell out of Erin. You see the pain and darkness she wrestles with but once in a while it over shadows the story between Colter and Erin and it takes a minute to get back into the love story. The climax storyline needed more buildup. I felt it coming but when it came I felt it sitting there out of place because of the lack of buildup. But it pulled the story together. The final scene in Fangs was so anti-climactic I had whip-lash and had to re-read that scene three times and still didn’t really understand what the hell happened.

Overall? Rae writes a page turner with hot, hot sexy times that keeps a reader glued to the pages. As I mentioned earlier I couldn’t put this book down. You may have thought I didn’t enjoy the book but I actually really enjoyed the book and I can’t wait to read the next book in the serious.

I am giving The Captured Heart by: Beverly Rae 4 out of 5 stars.

Reviewed by Christie
Posted by Unknown at 1:11 AM

Email ThisBlogThis!Share to TwitterShare to FacebookShare to Pinterest
Labels: 4 out of 5, Beverly Rae, book review