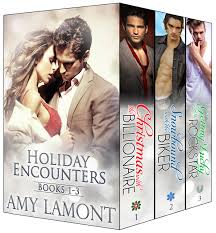 These three books are the result of four best friends making a bet to see who can have the wildest adventure by New Year’s Eve. This e-book includes the first 3 stories in the series .The theme here seems to be contrasting partners, things start well but misunderstandings cause strife which then needs to be resolved. There are no real surprises to these stories but they make for a nice short holiday romantic read. The sex is heated and sensual with a tiny touch of kink. Read on for more details of each story. Per the author there are two more books to follow.

Christmas with a Billionaire: Nathaniel Wilder is the cynical billionaire, media mogul who doesn’t really celebrate Christmas. Emma Glover is the somewhat innocent woman, recently finished college who still believes in Christmas magic. They meet when Emma is charged to go out and have sex with a stranger as part of her wild adventure. She’s a free-lance writer and a sex columnist who hasn’t done a majority of the things she’s written about.  Emma chooses the special hotel bar where her parents met and fell in love. Emma waffles about going through with her adventure several times before finally trusting Nate and going up to have sex with him in the hotel. Things between them become heated and the sex is more sensual than kinky. With things going so right between them Emma dares to hope for more than a one night stand, but after Nate sees her press pass under her ‘assumed name’ things get a little ugly. But it’s a holiday story so we know there’ll be a way for these two to get back together.

Some of the transitions could have been fleshed out a little more but it was a nice holiday read.

Snowbound with the Biker: Hunter Lawson was the bad boy who lived next door that Katelyn Murphy has crushed on for years. Katelyn is seeking her Master’s degree to continue working in her field of social work, she’s a pleaser. After a terrible day at work and finding out her mother left her father, Katelyn decides she isn’t going to let life pass her boy and seeks out Hunter. Hunter’s father eroded his self-esteem and even though he is the success owner of several businesses he doubts Katelyn’s motives for seeking him out and wanting to be with him. Katelyn has some kinky dominance/submission fantasies and shares them with Hunter, when they must stay over-night in his friends cabin due to bad weather. The glaring mistakes Katelyn makes the morning after is like a neon sign and Hunter’s expected terrible response is no surprise, but the author gives Katelyn the fortitude to correct her mistakes so this couple can also find their happily ever after.

Getting lucky with the Rockstar: Jared Sloane is part of a very successful band and Emma Glover is an exhausted medical student. They’ve been seeing each other for months and where  Jared is thinking relationship, Emma is thinking what they have is a short term, as a rock star has no place in her future plans. After a tragedy at work Paige takes Jared up on his offer to travel with the band for a week and while the first part is wonderful Paige lashes out at Jared saying things most people are never forgiven. Most of the sex is sensual, with a light bondage scene thrown in.

Reviewed by Wyldeheart
Posted by Unknown at 12:39 AM

Email ThisBlogThis!Share to TwitterShare to FacebookShare to Pinterest
Labels: 3.5 out of 5, Amy Lamont, book review