Race for Love by Nana Malone 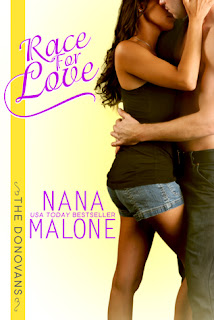 
Up and coming racecar driver, Kisima Jennings, is all alone in the world and that’s just how she likes it. After all, she has her career, who needs family? But when a near-fatal crash jeopardizes her future, she’s forced to lean on someone for the first time in her life.
As an athletic trainer, Derek Donovan is driven and has always kept his eyes on the prize, never letting personal entanglements come between him and his dream of becoming a head trainer for the New Orleans Jaguars. That is, until one misstep costs him everything. Now he’s starting over, but with a client as tempting as Kisima, is he destined to repeat the mistakes of his past? Or will letting someone close bring him everything he’s ever wanted? 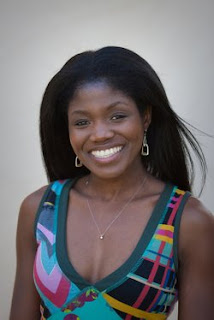 USA Today Best Seller, Nana Malone's love of all things romance and adventure started with a tattered romantic suspense she "borrowed" from her cousin.

It was a sultry summer afternoon in Ghana, and Nana was a precocious thirteen. She's been in love with kick butt heroines ever since. With her overactive imagination, and channeling her inner Buffy, it was only a matter a time before she started creating her own characters.

While she waits for her chance at a job as a ninja assassin, in the meantime Nana works out her drama, passion and sass with fictional characters every bit as sassy and kick butt as she thinks she is.

Want to know when the next book is coming? Hit up her Newsletter here. You'll only get updated when there is a new release or a special promotion for her Sexy, Sassy Readers. http://eepurl.com/2PeXb