The Billionaire's Deal by Crystal Kaswell book tour and contest 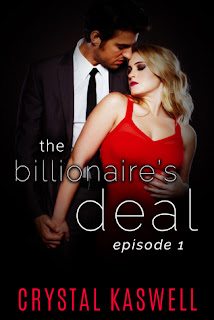 Synopsis:
Kat Wilder is screwed. No parents to take care of her. No money to pay the mortgage for the apartment she shares with her little sister. No chance at a future. She doesn’t even have time to daydream about her passions. She barely gets by waiting tables, getting treated like crap by the wealthy people who think she’s nothing.
Then she runs straight into billionaire tech CEO Blake Sterling.
Aloof, distant, and utterly in control, Blake is impossible to read. He wants Kat to play the role of his girlfriend and he’s more than willing to dig her out of debt. His intentions are good. According to him.
They need to convince everyone they’re madly, deeply in love. Their entire relationship would be a lie. And a big one. The one true thing—the two of them alone, together—that part would be amazing.
It would be Blake’s way. Blake’s terms. Blake utterly in control, inside and outside the bedroom.
There’s no way she can agree. There’s no way she can refuse.
Goodreads: https://www.goodreads.com/book/show/25799866-the-billionaire-s-deal

Crystal Kaswell writes steamy romances with flawed characters. When she isn't writing, she is thinking about writing. Or watching way too many episodes of Law and Order in a row.

a Rafflecopter giveaway
Posted by Unknown at 5:00 PM