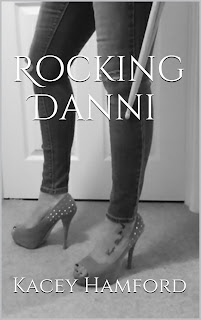 Danni has spent the last three years raising her daughter and living with a possessive boyfriend, she thought she was happy until ‘Flix’ arrived back in town.
Will, the strong, tattooed drummer for the band ‘Flix’ spent the last few years sleeping around trying to forget a certain blonde that had invaded his head and heart.
When Will and Danni meet again after three years apart she finds herself mesmerised by his chocolate brown eyes and re living intimate memories. Did she make the right decision walking away from him?
Will old feelings come back to life, will their hearts be drumming to the same beat or have they both moved on? A tragedy brings them closer together and Will discovers a secret. Will it make or break them? Only time will tell

Kacey is a pen name for two friends, Kelly and Claire. We started this journey together writing Rocking Esme in January 2014. We are avid readers and love all kinds of books. We were inspired to write a rock star book as that’s one of my (Kelly) favourite sorts of books to read. We joked about writing a book and then once we started it kind of just took off and we really love it. We both contributed to all of the Rocking books. Now Claire has taken a back seat due to work commitments and I wrote ‘Taking A Chance’ by myself and Claire was very much involved with the editing, reading and formatting. Now, I have written ‘Giving A Chance’ and had help from many of my friends with editing and beta reading.

It still makes me so happy to see reviews and sales going up. I love writing and hope to do it as more of a full time job in the future.